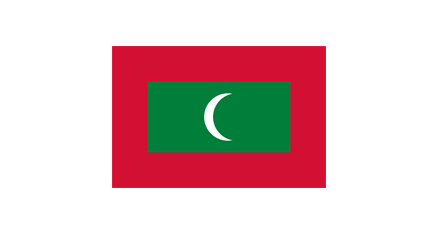 Germany has maintained diplomatic relations with the Republic of Maldives since 1966. GIZ supports the Government of the Maldives on behalf of the German Federal Ministry for the Environment, Nature Conservation, Building and Nuclear Safety (BMUB) in achieving its climate targets.

The Republic of Maldives consists of 1,196 islands, of which approximately 190 are inhabited and around 90 are used for tourism. Roughly one third of the population lives in the densely populated capital, Malé.

Tourism is by far the most important sector of the Maldivian economy, accounting for around 28 per cent of gross domestic product (GDP) and generating more than 90 per cent of total tax and customs revenue. Other sectors account for only a fraction of GDP. Most goods traded in the Maldives are imported.

Average per capita income has risen steadily in recent years but wide income gaps remain. There is a comparatively high rate of unemployment, especially among young people.

Political parties have only been established in the Maldives since 2005, as a result of a democratisation and reform process. In a referendum held in 2007, the Maldivians voted for a presidential system modelled on the US Constitution. The first freely elected President was Mohamed Nasheed. Establishing stable and democratic structures founded on the rule of law remains a challenge for the young republic. Fundamental rights such as freedom of speech and freedom of opinion are restricted and freedom of religion is expressly prohibited.

It is the potential impacts of climate change, however, which pose the greatest challenge for this island nation. As 80 per cent of the national territory is less than 1 metre above sea level, the Maldives and its fragile ecosystem are especially vulnerable to sea-level rise. In order to mitigate the possible impacts of climate change, the Government is working to achieve ambitious climate targets and is also setting up coastal defence systems and relocating communities from smaller islands, which are especially at risk.

German cooperation with the Maldives also focuses primarily on climate change impacts. On behalf of the German Federal Ministry for the Environment, Nature Conservation, Building and Nuclear Safety (BMUB), GIZ’s support centres on the country’s Zero Emissions Strategy. In line with this Strategy, the Maldives plans to deploy renewable energies and green technologies and provide training for public institutions and private stakeholders, equipping them with the requisite know-how to develop and implement comprehensive mitigation strategies and initiatives.