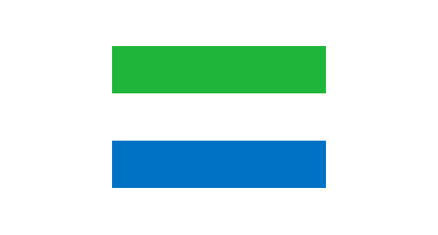 The Deutsche Gesellschaft für Internationale Zusammenarbeit (GIZ) GmbH has been working in Sierra Leone since 1963. In the 1990s, its mandate was suspended due to the civil war. It took up its work again in the 2000s, and since 2010, GIZ has been represented in the country again with a regional office for Sierra Leone and Liberia in Freetown.

Sierra Leone is a fertile land rich in mineral resources. Tourism is growing thanks to domestic and international investment. After 10 years of civil war, the economy experienced some growth starting in 2002. However, the Ebola outbreak and the collapse of raw material prices (in 2015/2016) have slowed this positive development. The economy managed to recover in the years that followed, but growth remains significantly lower than it was previously. The economy is mainly based on agriculture and the exploitation of mineral resources.

Sierra Leone still faces major challenges; in particular, its high level of unemployment. Out of the working age population, around 60 per cent are unemployed or underemployed, mainly young people. Poor access to education and resources as well as a lack of job opportunities pose huge obstacles to the country’s development. Sierra Leone is still one of the least developed countries in the world and is near the bottom of the UNDP Human Development Index (HDI).

Despite this difficult situation, the country remains peaceful: it has enjoyed a period of fair voting and peaceful changes of government, including the elections in 2018.

GIZ is working in Sierra Leone on behalf of the German Federal Ministry for Economic Cooperation and Development (BMZ), the European Union (EU) and other donors in the following areas:

To improve the income and employment situation in the country, and in agriculture in particular, GIZ is offering training and coaching programmes for small and medium-sized enterprises. Development partnerships with the private sector as well as market-oriented vocational training plans are available for training in manual and technical trades, in particular for the agricultural sector. In addition, the federal enterprise is advising the Sierra Leone’s Ministry of Agriculture on developing guidelines and improvements for institutional and technical capacity.

Health care is also to be improved through better training and further education options for staff – especially at district level – and the promotion of cross-border epidemic prevention.

GIZ is promoting the training of solar technicians and the development of an online platform for networking various actors in the energy sector.

To improve raw materials governance, the federal enterprise is helping interest groups in government, civil society and the private sector to promote transparency and responsibility.