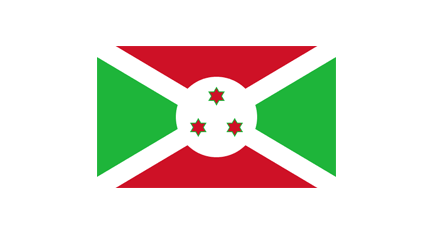 The Deutsche Gesellschaft für Internationale Zusammenarbeit (GIZ) GmbH has been working in Burundi since 1975. After the controversial re-election of the President in 2015, the German Federal Ministry for Economic Cooperation and Development (BMZ) suspended cooperation with the Burundian Government and police. All projects and programmes which aim to improve local living conditions are continuing.

Burundi is one of the smallest countries in Africa; however, with close to 11 million people, it is also one of the world’s most densely populated countries. Around three quarters of its people live in poverty, and 90 per cent are dependent on subsistence farming. Food supplies are inadequate, as is medical care. The situation is exacerbated by high population growth.

These problems are to a large extent the result of many years of violent conflict between various interest groups, which culminated in the outbreak of civil war in the early 1990s. In August 2000, 19 political parties signed the Arusha Peace Accords. In April 2009, the sole remaining rebel group laid down its arms. Municipal, presidential, senate and parliamentary elections were held in 2010 for the second time but were not recognised by the opposition. Renewed violence during the presidential elections in July 2015 displaced more than 150,000 Burundians to neighbouring countries.

On behalf of BMZ, GIZ has been working in Burundi’s water and sanitation sector since 2005. GIZ is also assisting Burundi with decentralisation, local economic development, reproductive health and family planning programmes. In addition, GIZ works with other regional partners on combating the illicit mineral trade.

Food security is a key priority throughout the region. In addition, with funding from the European Union, support is being provided to the Burundian Government on land rights and land registry issues. In cooperation with the Netherlands, GIZ and its partners are promoting the use of renewable energy by municipalities and households.