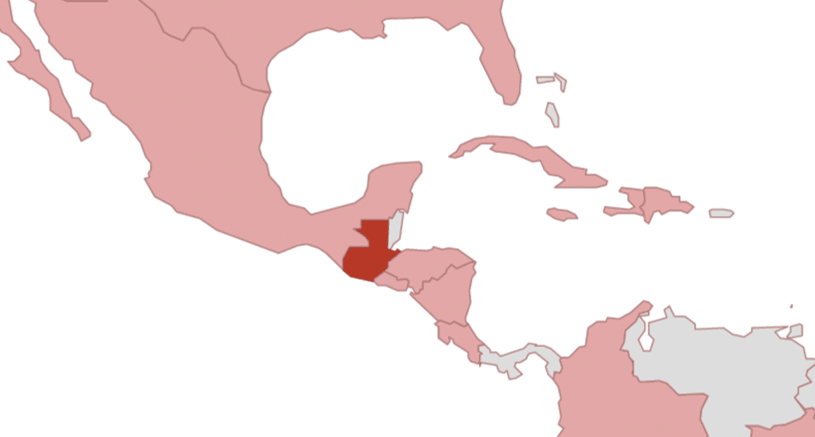 GIZ has been active in Guatemala on behalf of the German Federal Ministry for Economic Cooperation and Development (BMZ) since 1978.

The signing of the peace accords in 1996 ended 36 years of armed conflict in Guatemala. Despite various reform efforts, the country faces major challenges: its tax-to-GDP ratio is the lowest in Latin America and one of the five lowest in the world. As a consequence, Guatemala lacks the resources needed to build efficient governance structures, ensure adequate provision of essential services (health care, security and education) and meet the needs of the Guatemalan people, half of whom live below the poverty line. Government structures continue to be weakened by corruption, crime and a culture of impunity. The population is currently growing at a rate of around 3 per cent per annum, greatly intensifying the demand for resources year on year.

State education in Guatemala is largely confined to vocational training in technical occupations and secondary schooling in urban areas, and does not meet international standards. As a result, many children and young people, especially girls and members of indigenous communities, are still denied access to further education and hence to better income-generating opportunities.

As a result of routine crime, organised crime and international drug trafficking, the murder rates in the capital and in rural areas are high. A low clear-up rate (with seven out of 10 cases not investigated) undermines public trust and confidence in the state’s institutions. Social conflicts, particularly relating to the extractive industries, energy generation and land issues, are becoming more acute.

At the same time, efforts are being undertaken to respond to these challenges. In 2012, two fiscal reforms aimed at improving Guatemala’s tax revenue position were approved by Congress. In parallel, more intensive efforts are being made to increase transparency and monitor expenditure, especially at municipal level. The state is building structures for national dialogue and for crisis and conflict prevention. A police reform is currently under way, with a particular focus on prevention, better training and anti-corruption. The aim of achieving universal nationwide primary education has already been achieved, with primary enrolment/attendance now standing at 98 per cent, although the figures for secondary education are much lower at present. In 2013, Guatemala became one of the first four countries in the world to adopt a framework law on climate change adaptation in order to improve its response to the impacts of climate change.

GIZ supports these endeavours with its activities in three thematic priority areas agreed by the Governments of Guatemala and Germany:

The programmes implemented in these priority areas help to strengthen governance institutions in the field of taxation and citizen security, to institutionalise forms of non-violent conflict management in Guatemalan society, and to improve local authority services. GIZ actively supports Guatemala’s adaptation to climate change and the conservation and sustainable use of the Selva Maya, the largest tropical rainforest north of the Amazon Basin in Latin America.

GIZ aims to help increase the number of students enrolled in secondary school and ensure that these students receive a high-quality education in the state sector, to help prepare them to become good citizens and integrate into the local labour market.

GIZ International Services (GIZ IS) is currently working in Guatemala under an EU-funded programme to support regional economic integration. Various other regional projects are under way in Guatemala, focusing on the prevention of youth violence, enhancement of protected areas, promotion of small and medium-sized enterprises, and renewable energies. GIZ supports a Civil Peace Service (CPS) programme in Guatemala which focuses on human rights promotion (human rights protection and coming to terms with past violence and human rights violations). A new programme for the conservation of biodiversity in the Selva Maya, on behalf of the German Federal Ministry for the Environment, Nature Conservation, Building and Nuclear Safety (BMUB), is in preparation.

Taking the initiative for their own future