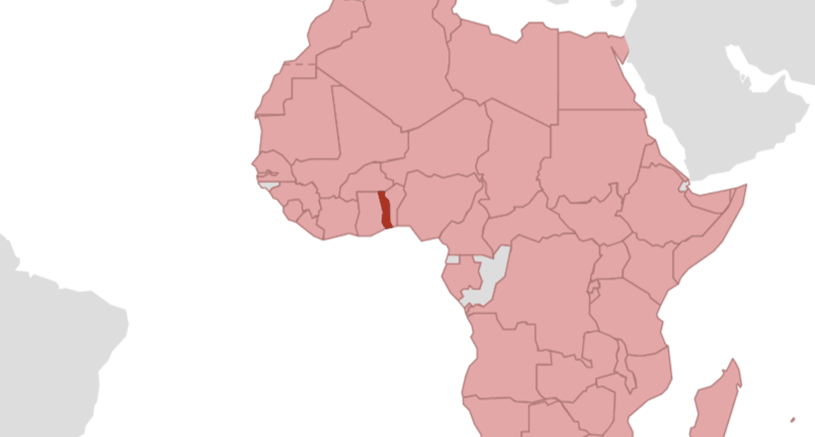 Following a break since the 1990s, the Togolese Republic was restored as one of Germany’s partner countries in 2012. The Deutsche Gesellschaft für Internationale Zusammenarbeit (GIZ) GmbH restarted its work in 2013 and opened a country office in the capital, Lomé, and is currently working at six additional locations.

The West African country has initiated wide-ranging reform processes and set itself ambitious goals with the national development plan. Democratisation and decentralisation are progressing: in 2019 the first local elections since 1987 took place. Important investments have been made in education, health and infrastructure, and the business climate for the private sector has been improved.

Despite these positive developments, Togo faces challenges to its development policy. Annual per capita income in the country is less than USD 700, ranking Togo 167th out of 189 countries on the Human Development Index published by the United Nations. Around half of the eight million people in Togo live below the absolute poverty line. Corruption is widespread.

Agriculture in particular is crucial for Togo's sustainable economic development, with over 60 per cent of the population working in the sector. However, there are considerable challenges. Productivity is low, there is a shortage of machines and lack of market orientation, plus a failure to comply with international quality, environmental and social standards.

In addition, around a third of young people are unemployed or underemployed. There is a lack of education and further training opportunities to meet the rising demands of the private sector – particularly for young women and those with disabilities.

The first real steps towards reform have been taken in relation to decentralising public administration. However, due to a shortage of skills and lack of resources, this process is not yet being implemented efficiently.

GIZ operates in Togo on behalf of the German Federal Ministry for Economic Cooperation and Development (BMZ) and in line with the development goals of the Togolese Government, with a focus on three priority areas:

In the rural development and agriculture sector, GIZ supports small farmers, processors and export companies by offering intensive training courses in entrepreneurship and production technologies. In order to reduce youth unemployment, a vocational education and training system has been developed that is especially adapted to Togo. At the same time GIZ is helping implement the decentralisation process by advising Togolese ministries and improving the capacity of municipal administration in order to upgrade local services.

GIZ is also implementing projects to improve Togo's health system and support a decentralised climate-friendly energy supply. Furthermore, GIZ is involved in promoting food security for the population via the One World – No Hunger Initiative.

Since June 2021, Togo has been a reform partner country of BMZ as part of the ʽCompact with Africaʼ initiative. This enhanced form of development policy cooperation supports the framework conditions for involvement by the private sector. In Togo, the initiative aims for better job opportunities and significant improvements to the investment and business climate as part of structural transformation of the economy. Togo's sustainable economic development and work on reform require support in areas such as private sector and financial system development as well as in good (financial) governance.